CRP is a molecule which is produced as an acute phase protein as a result of inflammatory events and infections. It is involved in the disposal of dead, but also vital cells and in the defence against infections. One of the resulting effects is that wounds are kept open in order to give immune cells enough time to reach the wound to fight off penetrating pathogens. This is beneficial as long as the wound is on the skin, as pathogens can penetrate here. In the case of organ damage, such as heart attack or stroke, CRP thus leads to an increase in primary damage.

Within the last two decades, the survival rate after acute heart attack has improved significantly. However, the prognosis of the patient after the infarct has improved only moderately, i.e. the occurrence of subsequent infarctions and, above all, the development of unstable angina pectoris or heart failure still represents a considerable risk and causes high follow-up costs.

This is where treatment by means of CRP reduction takes effect. PentraSorb® CRP binds CRP from the patient's plasma via a fully synthetic ligand and thus reduces the damage after an infarction and subsequently also the pathological remodelling processes in the heart.

The mode of action of PentraSorb® CRP is shown schematically in the following diagram: 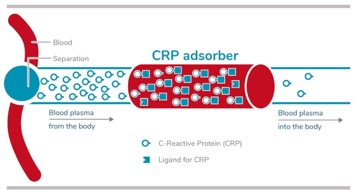 Schematic representation of the mode of action of PentraSorb® CRP